Five Ways Jiu Jitsu Surprised a Woman in a Restaurant 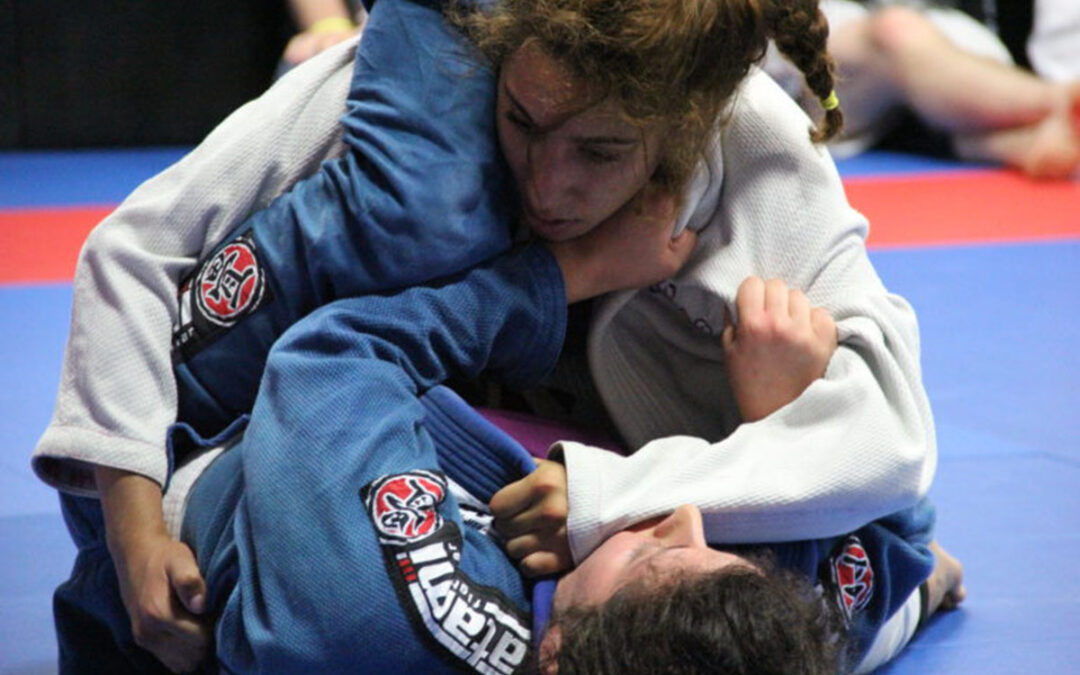 Recently, my daughter and I had an unpleasant confrontation with a man at a restaurant. He was clearly agitated before we even got there. But when he made aggressive movements toward my daughter, here’s what happened and why jiu jitsu is so important for women to train:

At this stage of my jiu jitsu, I think of myself as Snow Whitebelt The Dainty Grappler, and you would agree with that self-assessment if you saw me rolling on class video. I don’t look even one percent tough when I’m training. I’m still more awkward than athletic. If the youngsters at the gym breeze along in their jiu jitsu like smooth mag-lev trains, my jiu jitsu is the 100-year-old steam engine clunking along on rusty wheels to the town of Whyamidoingthis.

And sometimes, there’s fear. These are trusted teammates I work with regularly who would never injure me on purpose. I’m always a little scared of confrontation. I figured that meant I hadn’t learned anything in my 7 months training through bruises, body aches, and a 10-week-long shoulder strain.

But when Restaurant Guy made aggressive movements toward my daughter, I flew up from my chair so fast that I literally jumped out of my sandals. I stood on the cold cement floor, blocking him from my child. My feet were firmly based. Arms strong and ready at my sides. Eyes unblinking with solid eye contact. I was not backing up or backing down. Standing there barefoot, in shorts and a t-shirt, I felt almost no-gi. I felt “in my element,” if there is such a thing for white belts. I wasn’t scared, but I probably should have been. If he had thrown a punch, I’d have been hurt.

So where did this Rockstar Me suddenly come from? The answer is found in these 5 ways that jiu jitsu surprised me that day:

I was calm under pressure. Pre-jiu jitsu, I would have been in a stunned or confused zone and a bit panicked, looking around for someone to help. Instead, because of my training, my instinct was to take immediate preventive/defensive action. And that’s a good thing, because of all the people in that restaurant, not a single person came over to stand next to us in case things escalated. Even more reason for a woman to be ready at any time to handle herself.

My breathing was smooth and controlled. This never happens when I’m rolling. Higher belts often kindly remind me mid-roll to slow my breathing or to stop holding my breath. But in a real-life confrontation, my jiu jitsu training kept me calm and in control.

I was completely in the moment. I was able to do two things at once: limited verbal interaction to try to de-escalate the man’s anger, while mentally assessing his approximate weight and height, his balance and stance, his proximity to me and my daughter, my proximity to hard tables and chairs behind me if we fell that way grappling, the fact that he was big but seemed untrained, and my plan to attack his neck, should it become necessary.

I was thinking a couple of moves ahead. I realized later that I didn’t account for blocking his right arm which he likely would have thrown a fist with, but nonetheless, I was a couple of steps ahead in my mind. My plan was to jump onto him from the front, figure-4 my legs around his waist, throw my left elbow around his thick neck and secure a right underhook, push my head under that arm while clasping my hands and pressing my head into the head-triangle position, and expanding my chest and stretching my figure-4 down his hips for maximum pressure. Maybe that angle on the neck wouldn’t have done anything since we were standing, but my mind was active, not drawing a blank as it often does during rolling

I wasn’t thinking like a White Belt. By this, I mean that I was fully confident that I could take this guy. I had no doubts whatsoever. Whether that was true or not, I did not find out because management stepped in, but the confidence was there. It was real. I felt it deep down inside, surging through my limbs to the very tips of my swollen jiu jitsu fingers.

The gentle art and my patient professor, Alliance-affiliated Samuel Snow of Snow MMA near Fort Worth, Texas, have proved to me that while I have been down on myself about my perceived lack of progress these past 7 months, jiu jitsu has quietly begun rooting itself in my mind and body. I’ve already gained enough confidence to hold my ground and stand up for myself and my loved ones physically. As I develop my fundamental base and progress with my training, the confidence should grow along with the effectiveness of the techniques to back it up. For this, I am so grateful.

Jiu jitsu surprised me in many ways that day, but perhaps the most surprising was this: During those few seconds while I was assessing him, Restaurant Guy flinched. He actually glanced away and stepped back from me, 100 lbs his junior. I believe this was because the treasure that is jiu jitsu made me feel enormously empowered, and my opponent felt it, even though I was just standing still.

Brazilian jiu jitsu is powerful. Even when you don’t have to use it.

Has training Brazilian Jiu Jitsu helped you improve your confidence? Do you know someone else who could benefit from the increased confidence that comes from training jiu jitsu?

If this article has been helpful to you, or you think it could help someone else, please share a link back to this page or simply include “Credit: SnowMMA.com” Alliance Fort Worth / Snow MMA Jiu Jitsu. Make Life Better.(SM)

The Dainty Grappler is now a four-stripe white belt who began her jiu jitsu journey in January 2017. She trains in the Dallas/Fort Worth area under elite Alliance black belt Samuel Snow. She earned a bachelor’s in writing at TCU and has a marketing background. In addition to her passion for Brazilian jiu jitsu, she enjoys sports photography, nature walks with her dog, spending time with friends in the arts district, and salsa dancing.